Aboriginal and Torres Strait Islander Volunteers for the AIF 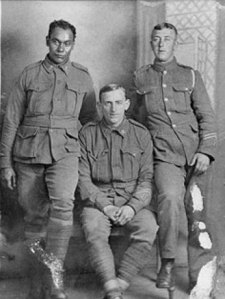 I first came across Philippa Scarlett’s name as part of my research into World War One Australian Aboriginal soldier Douglas Grant. Philippa was a guest on an ABC Radio program with two other researchers, Garth O’Connell and David Huggonson. Garth and David had led the way some years earlier by documenting the neglected area of Australia’s Indigenous war service record.

The radio program had the well known portrait of a WWI Aboriginal soldier, standing next to Private Harry Avery and an unknown British soldier, as a prominent image on it’s website for the interview. This photo, said to be of Aboriginal WWI soldier Douglas Grant, is a key element of my own research – as I do not believe it is Douglas Grant, but another unidentified Indigenous serviceman. About a year later, David Huggonson put me into contact with Philippa, who he said had just completed the most recent published book on the subject, had reviewed many photographs and was applying a solid analytical approach to her research.

After several discussions and emails, Philippa agreed to take a more detailed look at the photo in question and became the first independent researcher in the area to agree with my hypothesis: the Aboriginal soldier standing next to Private Harry Avery in the WWI portrait is not Douglas Grant, 13th Battalion, Atherton Queensland. Unfortunately, this particular tale is yet to be resolved, the Aboriginal companion of Private Avery is still yet to be identified.

While Philippa documents this question about the mis-identification of Douglas Grant (page 50 and page 155), this instance is only one in a multitude of issues, only one face and one name amoung hundreds of WWI Indigenous Diggers who served this nation. The Douglas Grant example is symbolic of the complexities involved in historical research in this area and demonstrates the importance of referenced rolls like that in “Aboriginal and Torres Strait Islander Volunteers for the AIF”.

Just ahead of the Centenary of ANZAC and WWI, Philippa’s work ‘Aboriginal and Torres Strait Islander Volunteers of the AIF’ provides a wonderful resource for future generations of Australians.

Adding newly discovered soliders to the honour roll, and refining the works of earlier historians, the book represents the most current and comprehensive referenced list of over 800 men of Indigenous heritage who volunteered for service in WWI.

The accompanying notes include comments on locating Indigenous men in service records, reasons for volunteering and the growth of interest in Indigenous service since the 1930s. The discussion of Indigenous involvement in World War One uses the words of Aboriginal soldiers and community members, contemporary non-Indigenous commentators and newspaper reports. There are 84 illustrations, 79 of which are individual and group portraits of Indigenous servicemen.

HOW TO OBTAIN COPIES

Aboriginal and Torres Strait Islander volunteers for the AIF: the Indigenous response to World War One is published by Indigenous Histories, price $30 plus $10 postage.