Posted on March 28, 2013 by Indigenous Histories

On April 13th 1791 Watkin Tench, a young officer in the Marines, recorded a meeting on the banks of the Hawkesbury river between Arthur Phillip, Governor of New South Wales and members of the Boorooberongal clan of the Darug.

We halted for the night at our usual hour, on the bank of the river.
Immediately that we had stopped, our friend (who had already told us his name) Gombeeree, introduced the man and the boy from the canoe to us. The former was named Yellomundee, the latter Deeimba. The ease with which these people behaved among strangers was as conspicuous, as unexpected. They seated themselves at our fire, partook of our biscuit and pork, drank from our canteens, and heard our guns going off around them without betraying any symptom of fear, distrust or surprise. On the opposite bank of the river they had left their wives and several children, with whom they frequently discoursed; and we observed that these last manifested neither suspicion or uneasiness of our designs towards their friends. [Sydney’s First Four Years  pp. 229 – 230].

Just over 100 years later William James Stubbings a great grandson of Yellomundee/Yarramundi, left Australia to fight in the Boer war. William Stubbings is one of the small number men of Aboriginal heritage known to have taken part in this conflict. He served in South Africa from 1899-1902 with D Squadron of the 3rd Regiment, New South Wales Mounted Rifles with Regimental Number 1533

His mother, Martha Lock was the daughter of Maria Lock and a granddaughter of Yarramundi. Martha was born in Blacktown in 1847 and married William James Stubbings (senior) in 1866. The Aborigines Protection Board minutes for 2 August 1900 record the discontinuation of rations to families in the Rooty Hill area, including the family of William Stubbings. [J. L Kohen Daruganora 2 2009, p.123.]

Since the establishment of the Protection Board in 1883, Darug families, like other Aboriginal families in New South Wales, had suffered increasing government interference with their lives including the removal of children. Despite this William Stubbings, the son of Martha and William, was amongst those who sought to fight in Britain’s colonial war in South Africa.

In early 2013 Kym Stubbings, in contact with another Lock descendant Liz Locke, wrote:

My great Grandpa was William James Stubbings. His son, Stanley William Stubbings, my much loved Grandpa left me as custodian of his dad’s Boer war medal and photo. I also have a copy of a much later photo of Great Grandpa marching on Anzac day with his medal proudly displayed. 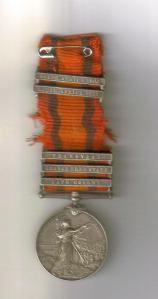 The medal is officially described as:

a silver and bronze medal with the crowned and veiled head of Queen Victoria on the obverse. The reverse has Britannia with a flag in her left hand holding out a laurel wreath to a party of advancing soldiers. In the background are two warships. Below the wreath the dates ‘1899-1900′ are shown. [Note these are not apparent on this medal] Around the top are the words ‘SOUTH AFRICA’.

The clasps attached to the ribbon refer to:

The service in South Africa of the 3rd New South Wales Mounted Rifles, indicated by these clasps, has been summarised by the Australian War Memorial:

The regiment travelled to South Africa in three group: B and D Squadrons were the first to leave Australia, sailing from Sydney on 15 March, on board the transport Maplemore; A, C, and E Squadrons, and the regimental staff, followed six days later on the British Princess. The machine gun section also left on 21 March, travelling on the transport Ranee. B and D Squadrons disembarked at Port Elizabeth on 12 April, while the rest of the regiment disembarked at Durban on 17 and 23 April. … From 2 May 1901 to 28 April 1902 the regiment served in the eastern Transvaal and in eastern Orange Free, attached to Colonel Remington’s column. In early 1902 it took part in several drives, the principal one being the Harrismith drive, which resulted in the capture of 251 prisoners, 26,000 cattle, and 2,000 horses. In February 1902 the regiment was in action during the Boer breakthrough at Langverwacht. In May the regiment embarked at Cape Town for Australia, leaving on 4 May and reaching Sydney on 3 June, after having stopped at Albany, Adelaide, and Melbourne.

There is no evidence that this William Stubbings served in WW1, but the photograph belonging to his great grandchild Kym Stubbings shows that he marched on Anzac day. This image probably dates from the 1940s or 50s. William Stubbings died in 1957. His Boer war medal is worn below the rosemary on his left lapel.

This photograph plus the portrait of William Stubbings in uniform and his Queen’s South Africa Medal, are possibly the only objects now existing which specifically relate to the service in the Boer war of a man of Aboriginal heritage.

Author & Publisher of Australian history, art and culture.
View all posts by Indigenous Histories →
This entry was posted in BOER WAR. Bookmark the permalink.

5 Responses to WILLIAM STUBBINGS: ABORIGINAL SOLDIER OF THE BOER WAR