Posted on April 19, 2013 by Indigenous Histories

Michael Riley, great grandson of George Campbell Hunt, has provided more information about his great grand father who was one those members of the AIF who did not fit the profile of ‘White Australians fighting for a White Australia’.

The records located by Michael and others show his father also George Hunt was from Antigua in the West Indies and had arrived in New South Wales by 1877.  Available photographs of George Campbell Hunt (decorated in 1917, the year before he was killed in action at Hamel), show him in a variety of lights – the debonair, in the photograph on the Australian War Memorial Roll of Honour– the stern and war hardened serviceman in a 21st Battalion group portrait taken in 1918 at Picardie and the relaxed soldier amongst mates in an informal photograph of George Hunt and friends provided by Michael. In this he and his comrades wear fezes. These and the children in the photograph suggest the photo was taken in Alexandria before the 21st Battalion proceeded to Gallipoli in August 1915. (Links to the former two photographs are in the 8 March posting WHAT WOULD CHARLES BEAN HAVE SAID ABOUT GEORGE CAMPELL HUNT AIF)

George Hunt is in the back row, left, in this photograph probably taken 1915. Courtesy Michael Riley 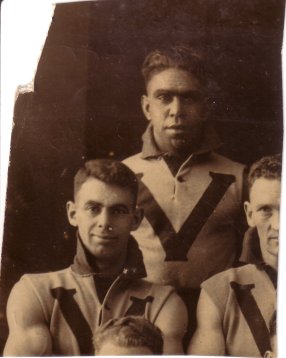 Of this photo Michael Riley said

The only match I can find they every played in together was a VFA v NSW Game in Sydney in 1931. The photo was taken sometime around then. Either in Sydney or Melbourne. The VFA were usually not allowed to play interstate games due them not being members of the Australian National Football Council. And the jumpers are consistent with the VFA.

This is not a complete photo but is a section cut out specifically to show Hunt and Nicholls. Although normally playing for different teams, Brighton and Northcote respectively – both were from Northcote which could explain the connection and the friendship which the cut out photograph indicates.

Doug tried out unsuccessfully for Carlton in 1927. He signed with the Northcote Victorian Football Association team, despite his nervousness about his Aboriginality, and was given a job with Northcote City Council.

Broome’s comments suggests that the colour of their skin could also have forged a bond between the two men.

Author & Publisher of Australian history, art and culture.
View all posts by Indigenous Histories →
This entry was posted in Other non white Australians and the AIF, WW1. Bookmark the permalink.