HE LOST BOTH LEGS: POSSIBLE ABORIGINAL SOLDIER OF WORLD WAR ONE

Posted on June 24, 2013 by Indigenous Histories

Casualties for the AIF were devastating for the mainly young men who left Australia sound in body. A widely reported statement of the number and types of casualties incurred by the AIF during WW1 gives sobering statistics.

MELBOURNE, Friday.—Of 72,750 members of the Australian Imperial Force who had returned to Australia to the end of December 30,675 were discharged as the result of wounds and injuries, 32,772 as the result of sickness, and 9303 for miscellaneous reasons. Injuries to the eyes accounted for the discharge of 34 officers and 2768 men. Of these two officers, and 29 men became totally blind, 18 officers and 920 men lost the sight of one eye, or their sight suffered as the result of gunshot wounds. 20 men lost both legs, 554 the left leg, and 531 the right leg, two men lost both feet, 79 lost one foot, and 16 officers and 584 men lost an arm. Northern Star (Lismore, NSW) 15 March 1919 p.5.

Just some of this number are shown in a photograph taken in England on 4 April 1917. The subject is a group of Australians with various injuries from G Ward, Horton War Hospital, Epsom, County of London. Horton, previously a mental asylum, became a military hospital for the period of the war.

The image is particularly startling because of the condition of one man in the front row. Discoloration of most of his hands may indicate burns but more significant is that he has lost both legs. 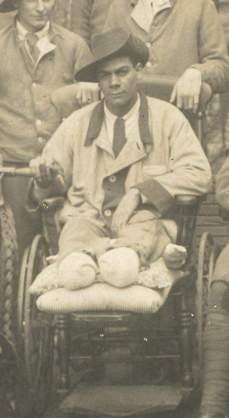 From his appearance, there is a possibility this man is of Aboriginal heritage. Attempts to identify him are ongoing but to date have yielded no results. The six members of the AIF who lost both legs so far located are John McLaren  511, Hugh McDonald, 4248, Walter Benjamin Ashcroft 3451, Malcolm Brown 4439,  Joseph Allen Baillie 22, Frederick Trice 2176 and Ivor Murray Wilson 733. (1)  None of these men are the man in the photograph.

The only known member of the group is Leslie John Hackwood of Warwick,  Queensland who wrote the information on the reverse of the photo – ‘Australians in G Ward. Horton War Hospital Epsom England. April 4th 1917. Les J Hackwood.’ 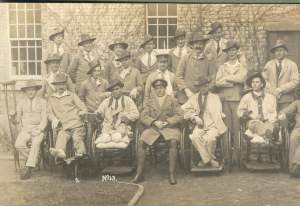 Information about any of the other men in the photograph could possibly prove useful in identifying the  man without legs. Information about servicemen who lost both legs could also be helpful, even if only for elimination purposes. In particular oral family history may hold the key to identification of this AIF member.

Note. The photograph, which was advertised on Ebay in June 2013, was located by Peter Bakker of Hamilton Victoria.

1 Response to HE LOST BOTH LEGS: POSSIBLE ABORIGINAL SOLDIER OF WORLD WAR ONE