Posted on August 30, 2013 by Indigenous Histories

Albert Edmund Leane enlisted in the AIF in January 1916 under the name Albert Edward Leane. He gave his age as 18 and became a member of No 4 Tunnelling Company. The Company left Sydney on 22 May but Leane subsequently disembarked at Freemantle. He enlisted a second time in June 1916. Although still under age, his second enlistment included a letter of permission from his father. In fact according to his family he was still younger than 19, the age stated on his second attestation. He served with the 2nd Pioneer Battalion on the Somme where he was twice wounded.

Amongst his possessions, now held by family members is a boomerang given to him in connection with his war service. It is inscribed 5 Platoon 149 GST Company AIF. Also inscribed on the boomerang are approximately twenty signatures but these are proving hard to decipher. There is no record of his serving in World War Two however 149 GST (General Transport) Company was a World War Two unit. The exact circumstances of his receipt of the boomerang are unknown and still being researched and efforts are under way to identify the signatures.  Boomerangs were a recurring motif during both wars and used on official and unofficial badges, colour patches, brooches, ornaments and correspondence. The boomerang was a powerful symbol of return and of a continuing link between individuals. Associated with boomerang images were messages like Hurl this Boomerang Across the Sea. Hoping You will come back to Me and the inscription on the boomerang given to Captain Carmichael, responsible for the recruiting drive for the 36th Battalion AIF, which says ‘Thynulungatha’ translated as ‘come back here’

What is significant about the possession of this boomerang by Albert Leane is that he was known as ‘Darkie’ by his AIF friends and that the boomerang given to him can be seen as referencing his Aboriginality. Albert Leane was of Indigenous heritage – a  Darug man of the Sydney area.  In 1893 only a few years before his birth, his grandmother Lucy Leane of the Cabrogal (Liverpool) clan of the Darug petitioned the New South Wales Aborigines Protection Board describing herself as

the only surviving Native Woman of the Georges River and Liverpool District, residing here ever since her birth Fifty Three Years ago, as the undersigned witnesses can vouch for and attest. Being a bona fide Original Native of Australia & of this District, your Petitioner requests of you the supply of a boat as granted by Government in all such cases, for the purposed of carrying on trade on the Georges River The Sydney Morning Herald 9 June 1893. 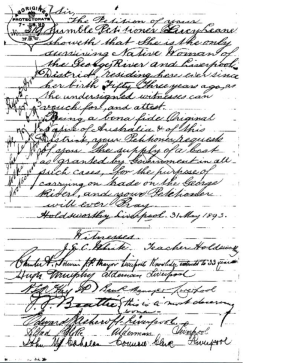 Her petition was unsuccessful and she died two years later. Nevertheless her son Albert Charles and grandsons Albert Edmund and William Arthur served in World War One and two great grandsons Leslie and Sydney served in World War Two. Albert Charles, 55th Battalion was badly wounded and captured by the Germans at Armentieres, France on 20 July 1916. Edmund William Leane yet another son Of Lucy volunteered unsuccessfully in 1918.

On 14 March 1931 Albert Edmund Leane placed an advertisement in Smiths Weekly, known as ‘the diggers paper’, couched in that mixture of euphemism and understatement characteristic of the way digger humour made light of the harsh realities of war. The request contained in this advertisement was testimony to Leane’s desire to maintain links with those he served with during World War One:

Bert ‘Darkie’ Leane 2nd pioneer Battn. wonders how many of the boys of C Company are still able to sit up and read Smith’s and how many of No 1 Section who shared an issue of 5.9 on the night of July 4 1918 together with himself, Phil Dynes, “Chopper” Alderman, Corp Sullivan, Vic Carrington, Dave Wright, “Curley” Howell and others still have votes. After 12 years he would be grateful to hear any news of them or from relatives.

The issue of 5.9 he mentions is a reference to the bombardment by German 5.9 artillery shells. The date 4 July 1918 was a momentous one for Leane and others in his section and the last day of his active war service. The wounds he received in action on the evening of 4 July resulted eventually in his being invalided to Australia. His own entry in a very sparse diary kept during the war years reads

Wounded on the left at Villers Bret about 10 pm Carried out by four Americans. Arrived at Casualty Clearing Stations.

The other friends in C Company mentioned in Leane’s letter were either killed or wounded on the evening of 4 July or the early hours of the next day. The war diary of the 2nd Pioneers for 4 July, headed ‘Somme’ states injuries to C Company were two killed and one officer and thirteen others wounded. A letter from one of the latter, Dave Wright, contained six pages of comment on the fateful day in July 1918 and news of friends.

Dear Darkie,
Just a line to let you know I have just drunk your health … Well I was pleased to see your note in Smith’s and you can guess I was pleased to hear from you after considering how you got on, as I never saw you after you were knocked.
The last I heard of you was from some yanks at a dressing station you had gone through ahead of me. I took Vic Carrington out also had Stasbourg the sergeant with me but I didn’t see them again … Vic Carrington though I carried him out that night saved me … it was through Vic singing out ‘Chopper Chopper’ that stopped me running … Well Darkie it makes a man feel years younger  when he looks at those names. Phil Dynes he said to me in the afternoon it would be alright if a man knew what his future would be and a few hours after he was killed … I have just thought of Curley Howell when I was going down the road with Vic hanging on my back Curley passed me going ‘hell for leather’. I called out to him are you hit Curley. Yes he said. 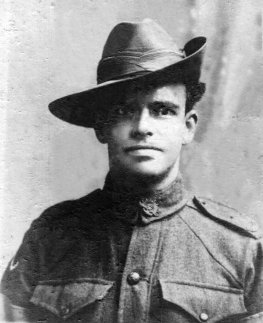 Bert ‘Darkie’ Leane emerges as a thoughtful man affected by his wartime experiences and one who developed and later sought to revive the bonds commonly referred to as ‘mateship’ with those he served. His skin colour was acknowledged but if those who called him ‘Darkie’ connected this with Aboriginality, it is obvious from Bert’s query in Smith’s and Dave Wright’s reply, that his complexion and its implications were not an issue.

Men from the Leane family were not the only descendants of Lucy Leane to serve in World War One. Lucy’s granddaughter Marion Smith moved with her family to Canada as a child and later married a Canadian, Victor Walls. She trained as a nurse at New England Hospital, Boston USA qualifying in 1913 and in 1917 volunteered for service in World War One, serving with the Queen Alexandra Imperial Military Nursing Service (Reserve) in France, Belgium and Italy. After the war she was responsible for the introduction of the Canadian Red Cross to Trinidad where she and her husband were teachers at a missionary college. During World War Two she was Trinidad’s Red Cross commandant and awarded the Distinguished War Service Medal. She is to date the only identified woman of Australian Indigenous heritage who served in World War One. There will be more on Marion Smith in a later post.

Writing runs through the Leane story from Lucy’s petition to the works of Marion and her cousin Albert ‘Darkie’ Leane. As well as his World War One letters and diary, in 1952 Albert registered copyright for a literary work – a poem to his wife entitled Here in a Cottage Garden. Marion was the author of the school hymn, still used at the missionary college where she taught and compiled a book which gave guidance on elementary home nursing in the tropics.

Lucy Leane’s request to the Aborigines Protection Board has parallels with the actions of Yuin Aboriginal woman Coomee Nullunga or Maria of Milton, New South Wales (born c 1833) who in the latter part of her life demanded payment from local white families on the birth of a child, seemingly in recognition of her prior ownership of the land. It also has overtones of the actions of fellow Darug woman Maria Lock who in 1831 petitioned Governor Darling for her deceased brother Coley or Colebee’s land grant at Blacktown. The actions of these three Aboriginal women demonstrate strength and spirit and a sense of entitlement derived from their Indigeneity.

The Leane family record shows a strong streak of creativity, individualism, strength of character and willingness to serve in different and difficult capacities. Their history is all the more remarkable considering the history of dispossession, disadvantage and discrimination which is inseparable from their Aboriginal heritage.

My thanks to Judy Joyce niece of Albert Edmund Leane for her comment, access to family papers and family information. Judy points out that Albert’s boomerang is a ‘killer’ boomerang and not the returning kind. However in general the symbolism of the boomerang in the public mind remains.