When war broke out in September 1939 Australia did not hesitate to join Britain in her opposition to Hitler and Nazi Germany. The second AIF or Australian Imperial Force, comprised like its predecessor solely of volunteers, was immediately formed and one of those men who were quick to offer their services was Walter Henry Steilberg. He volunteered aged 21 on 7 November 1939 and served as NX1164 in the 2/1st Field Company, Sixth Division. The Sixth Division progressively captured Bardia, Tobruk, Derna and Benghasi in January in the first Libyan campaign before being sent to Greece in March of that year to support the Greeks against the Germans invading from Yugoslavia,  from the start a hopeless task. The inevitable defeat and evacuation, for Australia alone resulted in the loss of 320 lives and the capture of 2,065 men. One of these prisoners was Walter Steilberg. He refused to accept his situation and in the following years escaped seven times from POW camps and work parties. He recalled his motivation and determination later in life when he said ‘I made up my mind I’d beat them in the end and I’d be a free man by the end of the war’ (quoted by Paul Rea in Neave Aussie Soldier Prisoners of War p.280). To punish his continued attempts to seek liberty he was sent to the Nazi concentation camp Terezin in Czechoslovakia. His experience and the brutalities he witnessed there have been documented in newsprint, film and books. 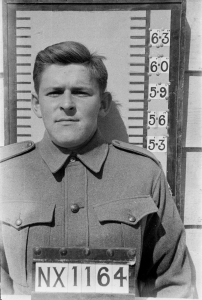 After the war he was amongst those who received the British Empire Medal in 1947 for their attempts to escape from German custody. However his experience in Terezin was unrecognised for forty years because the camp was not accessible to the Red Cross and no records existed of the presence there of prisoners of war. Finally in 1982  the Australian Government granted individual compensation of $10,000 to him and the few others like him.

Writing on the prisoner of war experience in 2011 Peter Monteath (POW: Australian Prisoners of War in Hitler’s Reich p.312) reports an exchange between Steilberg and a German officer early in his captivity: ‘Australian aren’t you? Why aren’t you black?’There was a considerable degree of irony in this question. What is today not well known is that Walter Steilberg was a direct descendant of Yarramundi chief of the Boorooberongal clan of the Darug – traditional owners of the Sydney basin. A meeting between  Yarramundi and  Arthur Phillip, Governor of New South Wales was recorded by Watkin Tench on 13th April 1789.(Sydney’s First Four Years pp.229-30). His Aboriginal family’s record of service was an extensive one. His great uncle Jerome Locke was a member of a colonial unit, the Windsor Volunteer Corps – and with two of his sons served in France with the first AIF. Walter Steilberg’s great uncles Walter and Norman Sims were also members of the AIF – in fact in total 27 members of his Lock and extended Lock family volunteered for the First World War and most went on to serve in the Middle East, France and Belgium. Not only this but William Stubbings, son of his great grandfather’s sister Martha Lock, was a member of the 3rd New South Wales Mounted Rifles and served in the Boer war.

The  Greek campaign was the first time Australian and New Zealand units had fought together as an Anzac force since Gallipoli. In 1915 Walter’s cousins Henry James Locke and Alfred Frederick Bolton were part of the first Anzac force. In 1941 Walter Steilberg became part of its second incarnation. 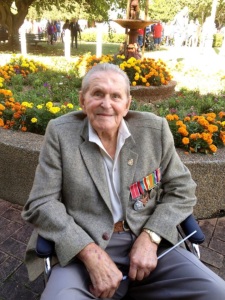 Walter Steilberg , 2013 wearing his campaign medals. His British Empire Medal is on his right.

Walter Steilberg was not the only member of the Lock family to serve in the Second World War. Others included his brother Charles. However few after reading about what he saw and endured could argue that his experiences were not amongst the most challenging.

Thank you to Walter’s daughter Karen Steilberg for permission to write about her father and to Walter’s niece Liz Locke, daughter of Charles, who first told me about Walter’s history.

Author & Publisher of Australian history, art and culture.
View all posts by Indigenous Histories →
This entry was posted in WW2. Bookmark the permalink.