Posted on April 25, 2017 by Indigenous Histories 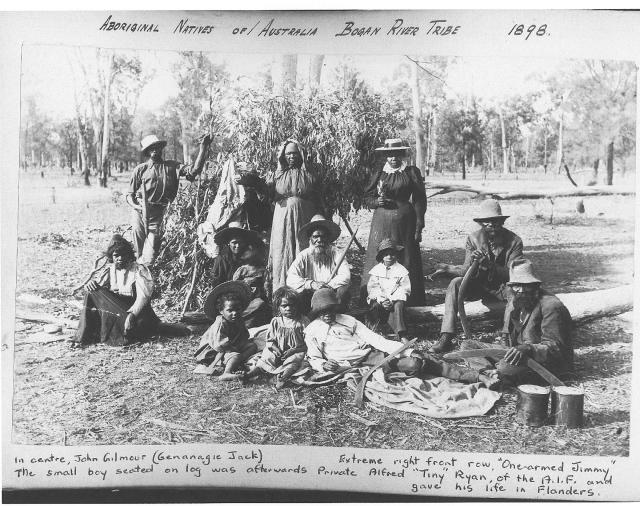 Sometime after 1917 the remains of an Australian soldier buried at Glencorse Wood Belgium, were identified as those of Alfred James Ryan, service number 1802.  Included with evidence which led to this identification was the presence of a colour patch with the letter A. This, even without service details, indicated that he had served at Gallipoli. In 1917 the Australian government legitimised the wearing of the A for Anzac badge to show that the wearer had taken part in the 1915 Gallipoli campaign, a practice which had already taken hold and one which showed the significance this campaign had come to represent within the AIF. 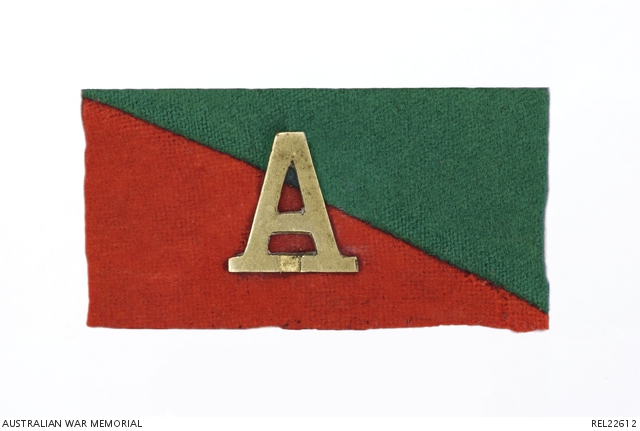 The A for Anzac badge on a colour patch of a member of the 6th Light Horse in the collection of the Australian War Memorial.

Alfred Ryan, a shearer, came from the Peak Hill area of New South Wales. He volunteered on 29 January 1915 and sailed with the 4th reinforcement of the 3rd Battalion later transferring to the 2nd Battalion. He reached Gallipoli on 26 May and shortly afterwards sustained a wound to the head requiring hospitalisation and recuperation in Alexandria. By November 1916 he was in France and had transferred again, this time to the 1st Machine Gun Company. He served with this unit until his death on 25 September 1917 – not far from the Ypres-Menin Road. He was 25 years old. Ryan’s Gallipoli service places him among the possibly 70 Aboriginal men now known to have served in this campaign.

Few letters from Aboriginal servicemen are known to exist today – included amongst them are some from Ryan. This is in no small part connected with his career as a boxer (fighting under the name Tiny Ryan) which was taking off in the years before he enlisted. Headlines in the Dubbo Despatch and Sydney Sun relating to Ryan’s war service ranged from TINY RYAN, TINY RYAN WOUNDED and BOXERS IMPRESSIONS and attest to the public interest in him as a boxer during his service with the AIF, an interest which led to the publication of his letters written from abroad to friends in the boxing world.

This was summed up by the Referee’s correspondent W F Cordett in an emotional and shocked column on learning of Alfred Ryan’s death. (Referee 14 November 1917 p. 9)

Tiny was a personality, he was in the public eye. He was also one of our best correspondents. We had a letter recently from him, and he was keeping us in touch with the rest of the boys from here who were doing their bit on the other side…Tiny gone -Tiny, the merry-faced, laughter-loving, light-hearted big boy – for he was only a boy – gone. It seemed incredible. Why, in his last letter, brimful of humor and breezy optimism, he had told us that he must have a charmed life. ‘I don’t think I shall ever get killed,’ he jocularly wrote, ‘as I am what you might term a Shell Diviner, but one may get in some way some day, and I suppose it will be ‘Close the gates for Tiny.’

Ryan’s letter to W F Cordett published in August 1915 (Sun 15 August 1915, p.14) printed under the heading BOXER TINY RYAN WOUNDED, gives an account of some of his experiences on the Gallipoli peninsula.

The well-known N.S.W western district heavyweight Tiny Ryan is lying wounded at Heliopolis, Cairo. His letter to me, dated June 26th supplies the following address, which I give in the hope that some of his friends may write to him: No 180 [2] 2nd Battalion 4th Reinforcements, A.I.E.F, 1st Brigade, Egypt.

He says: “Since my last letter to you from on board the transport I have had pneumonia, got better, went over to the Dardanelles, and have been wounded, and I am once more back in Cairo, and am getting along famously since an operation upon my head. I was in the main firing line trench on observation post at about 3 o’clock in the morning, and had been relieved just at that time by the second post. I stood talking to him, telling him of a sniper who had been firing point blank at our position all the morning from the right of the Turkish trenches, and to be careful not to put his head above the parapet. It was then the Turks’ guns started a bombardment of our trenches. They blew sandbags down all round us, and nearly smothered some of the boys. They had got the range to a nicety of one of our guns, which they managed to put out of action, killing the corporal in charge. We were all down in a minute. A shell burst along the main trench, and I was hit by a piece of it, which knocked me flat. I did not feel any pain till after I was dressed, and then a swelling started, which nearly drove me off my nut — that is all I felt I had left of it, for I thought half my head had gone. However, I was taken along with a good number of other wounded boys on board a mine-sweeper over to Lemnos Island, then we were put on the boat Tranconia and brought to Alexandria, and thence here by train. I was given the best of treatment, and dined right royally on chicken every day, and plenty of custard. We are getting well looked after in the hospital.

His praise for Australian was not one eyed and he also refers to New Zealanders:

The landing took place within half a mile of where thousands of Greeks were simply massacred trying to force a landing which they never succeeded in doing some time back. We are strongly entrenched on the Peninsula now – inland about two miles – with the New Zealanders on our left flank. They are deserving of equal praise.

Moreover he draws attention to the Greeks and to the part played by the men of the Indian mountain batteries, who he says ‘give the Turks some hurry up when they send a 12-pounder in among them’. His reference in this June letter to the Gallipoli landing, only one month after it occurred, demonstrates clearly that it had already gained a grip on the consciousness and sense of history of the men who were there.

The landing at Gaba-tepe, I suppose is just as well known to you as it is to us here, only we have really been on the soil where it took place — never to be forgotten ever in the history of the world. Australia may well be proud and boast of her loyal sons.

We are indebted to Ryan’s skill and reputation as a boxer for the preservation of his contribution to the scant collection of letters which are available from the Aboriginal men who served in the first AIF. In fact without his public boxing profile it is very likely his informative letters may not even have existed – written as they were to boxing connections – let alone survived. It seems something of an irony that Aboriginal men have always achieved publicity in the mainstream world as sportsmen – particularly boxers – when other Aboriginal fighters, the men who volunteered and fought in a different arena as Australian soldiers, have not fared so well. In Tiny’s case, his engagement in both these arenas has led to the creation of a valuable and lasting written record.

I am indebted to the research of Sandra Smith of Dubbo and to Christine Cramer who  drew my attention to the service of Alfred Ryan.

Author & Publisher of Australian history, art and culture.
View all posts by Indigenous Histories →
This entry was posted in Aborigines sport, WW1. Bookmark the permalink.